Today we are in an era of unprecedented warming and the phrase “climate change” is common place, the concentration of CO2 in our atmosphere has exceeded 400ppm (Parts per million) and our planet is the warmest it has been for over 3 million years. From egg to adult, Leatherbacks will face a series of threats from rising temperatures.

The International panel on climate change working group 2013 reported that sea level rise attributed to climate change will result in 1-2m increases by the year 2100. As a result, the erosion of shorelines favoured as nesting areas by Leatherback turtles may be compromised from storm surges and saline intrusion into the nest chamber. In recent year’s here in Grenada the Ocean Spirits team have recorded rapid erosion and degradation of available nesting habitat on our 2 primary index beaches. 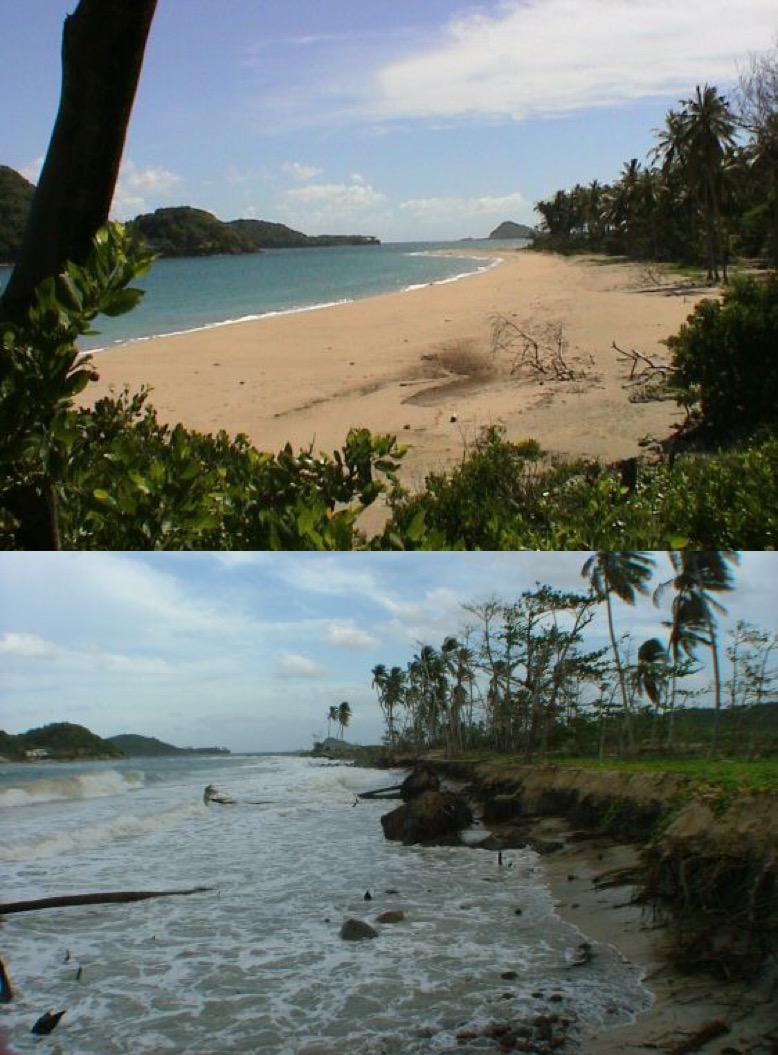 Even though the seas are warming at only a third of the increases being seen in terrestrial environments, species in our oceans are shifting distribution faster than those on land. Leatherback foraging hotspots are typically in regions with high ocean productivity, particularly those with large phytoplankton presence. The uncertainty of rising ocean temperatures on upwellings and productivity is a concern for Atlantic Leatherback populations that will likely forage and nest in new areas further north of existing locations.

• Reduce your meat and dairy intake – Raising animals for food requires massive amounts of land, food, energy, and water. A staggering 51 percent or more of global greenhouse-gas emissions are caused by animal agriculture. An easy way to start off is to adopt a “Meat free Monday”.

• Change your energy supplier – It only takes a couple of minutes to switch and you, as a consumer, will be helping in the fight against climate change, look for suppliers who have high outputs of renewable energy such as solar, wind and wave.

• Install an energy efficiency meter in your home to help you quantify and manage your heating and water needs effectively. Contact your local authorities to see if grants or subsidies are available to make your home more energy efficient such as solar panels or cavity wall/loft insulation.

The plague of plastics…

Rising marine litter levels are a huge threat to the health of our oceans, improved socio-economic understanding of the connection in areas such as producer responsibility, consumer behavior, fishing and aquaculture, tourism, shipping and waste water are key. The rise of plastics in the 1960’s to present day has been hugely detrimental to marine life, we currently use 8% of global oil production for the manufacture of plastics, a third of which, the means to recycle do not exist (Thompson, R. C. et al. 2009).

With an estimated 8 million tons of plastics alone entering the sea annually, the primary threats to Leatherback turtles are entanglement and ingestion. Entanglement can impede all aspects of Leatherback behaviour from diving and foraging to mating and nesting. The ingestion of marine litter (primarily single use plastic bags) resembling their gelatinous prey, can cause intestinal blockages, satiation, and starvation in severe cases. Plastic is reported in 34% of stranded Leatherback dissections (Mrosovsky et al. 2009). 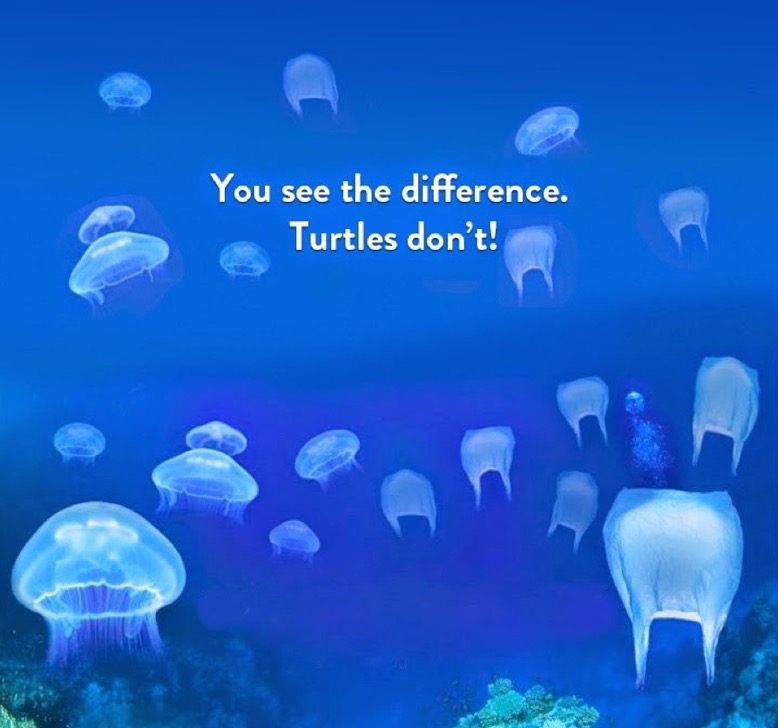 In addition to more familiar marine plastics like single use carrier bags, bottles and fishing debris there are a number of other sources and routes into the ecosystem that many people are unaware of.

Nurdles – Are small plastic pellets about 3-5mm in diameter, Billions are refined each year from oil and then sold onto manufacturers to manipulate into the things we buy, from water bottles to car parts all plastic starts off life as a nurdle. Spills and mishandling by industry can mean nurdles end up at sea. These toxic pellets are ingested into the marine food chain at the lowest level and bioaccumulate in larger longer lived animals. Nurdles have been recorded in over 180 marine species including turtles. Humans are not immune and it is estimated that seafood consumers ingest around 11,000 microplastic particles per annum primarily from shellfish species. Although far removed from plastic manufacturing on the north end of Grenada we still regularly record nurdles on our primary nesting beaches. 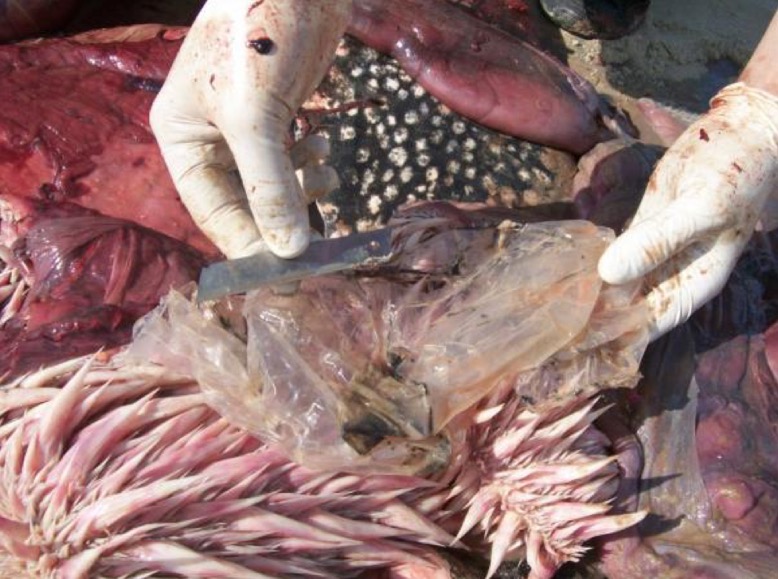 Microbeads – Are you aware that tiny plastic particles are lurking in hundreds of toiletries available globally? Tiny plastic pieces are in many toiletries where they have replaced natural materials such as coconut husks and act as exfoliants to open your pores during cleaning. These plastic particles pass straight down the plug hole and out into coastal areas where they can be ingested and bioaccumulate in the marine ecosystem.

Microplastics – Tiny plastic particles released by synthetic fabrics can cause harm to marine life when they enter rivers and oceans. Each cycle of a washing machine could release more than 700,000 microscopic plastic fibres into the environment. Studies have found that found that each wash of a synthetic fleece jacket released an average of 1.7 grams of microfibers!

Sewage related debris – Any item that has not passed through you naturally should not be flushed down the toilet, other than toilet paper. People unfortunately flush objects such as cotton buds/Q tips, tampons, condoms, nappies and razors without thinking about the consequences, sewage related debris or SRD is a problem that is growing exponentially with population growth and has a huge impact on the water environment. Studies in some countries have quantified that SRD makes up 10% of marine litter found on our shores and here in Grenada the Ocean Spirits team regularly remove this waste from our nesting beaches.

• Reduce the amount of single use packaging you purchase in products and look for natural alternatives. Avoid plastic carrier bags, drinking straws and plastic/polystyrene cups.

• Check your bathroom and remove any toiletries that contain plastics, they may be listed as ingredients below Polyethylene / Polythene (PE)
– Polypropylene (PP)
– Polyethylene terephthalate (PET)
– Polymethyl methacrylate (PMMA)
– Nylon
http://www.mcsuk.org/what_we_do.php/Clean%20seas%20and%20beaches/Campaigns%20and%20policy/Microplastics%20-%20scrub%20it%20out

• Consider purchasing a lint filter for you washing machine outlet pipe that will remove plastic microfibers from clothing http://environmentalenhancements.com/Lint-LUV-R-links.html